True to Self - Exhibition until 25 July 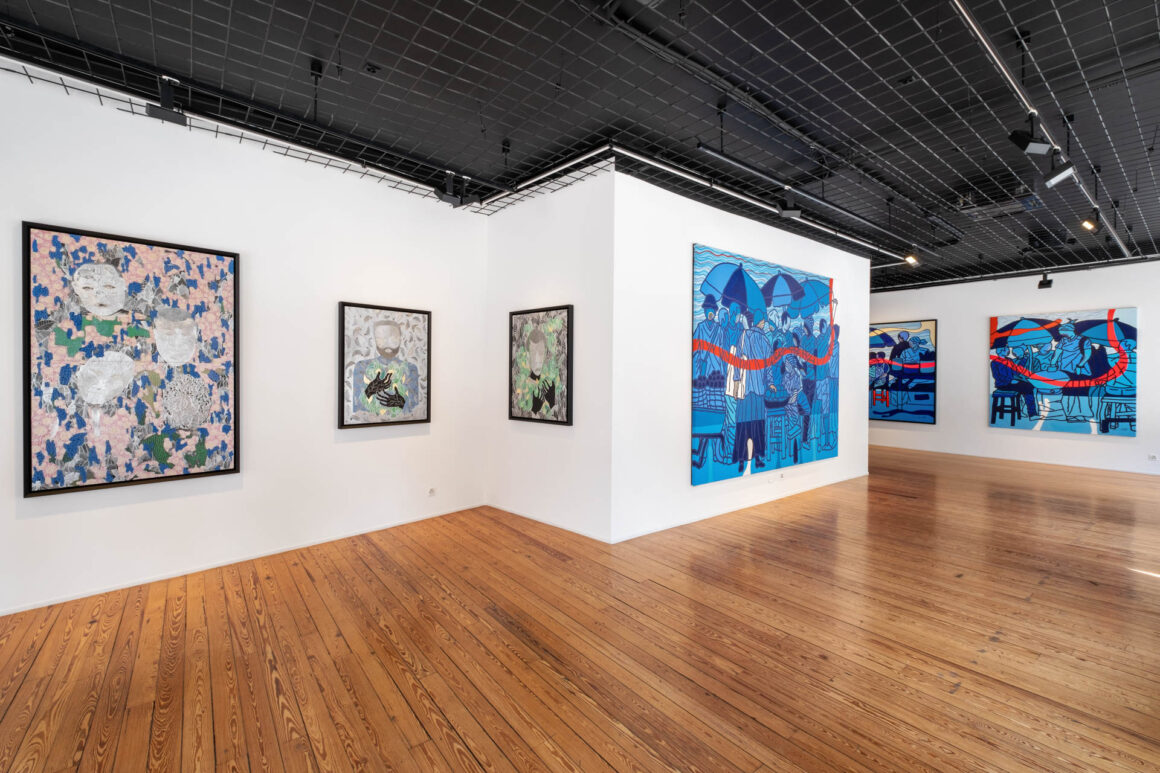 Galerie Des Bains in collaboration with Invisible Borders is pleased to present True to self: a dialogue between Ajarb Bernard Ategwa and Maurice Mboa, the first duo show of the two Cameroonian artists in Switzerland.

The exhibition True to Self is a conversational interplay between two young artists, whose path may seem similar but whose artistic expression contrasts. One uses a sociological perspective rooted in everyday realities and, the other, a philosophical one based on a multicultural experience. As much as their works and techniques diverge, they complement each other and reveal the ambivalence of the role of the artist. At times he is a the witness and transcribes the concrete realities of his contemporaries, and at times he deciphers the limits of the graspable and becomes a vector to escape those daily realities. In both cases, however, the artist must remain true to self.

Young Cameroonians of the 80’s

The road to success has been long for both artists who are now in their thirties. It was paved with obstacles and they have had to be particularly resilient to be able to assert themselves as artists. Both born in the 80s, they grew up in a country where it is difficult to conceive art as a viable career. The artistic milieu is hardly institutionalized there, and it is therefore a great challenge to find a strong framework for artistic development, not to mention the discouragement of certain relatives and the hardships encountered to make a living from their craft on a day to day basis. However gifted since childhood with a clear vision of their life as artists, they both aligned their grit with a personal commitment to remain faithful to this vision, and can now freely express themselves artistically.

Ajarb is originally from the Southwestern region of Cameroon and grew up in the economic capital of Douala, a rapidly expanding city, whose rampant urbanism goes hand in hand with an evermore impoverished youth. As a witness of the popular realities of Cameroon he explores his society in a synchronous manner, creating life scenes centered around the marketplace, a focal meeting point of the Cameroonian population. He paints the diverse people he encouters in this crossroad, sometimes it is women who sell fruits and vegetables harvested in the field, and sometimes it is the diplomats who come to buy eggs for breakfast, all of them sharing the bond of living this moment that Ajarb marks by a thick continuous line dissecting his works horizontally. The heroes of his Afropop scenes are, however, the young people of his generation, these young “hustlers” as they are called in Cameroon, who, for lack of better local opportunities, become sellers at the market despite the fact that they are mostly university graduates. Ajarb explores their stories of stagnation, reflective of the situation in the country whose governance has not changed for the past 40 years. The underlying gloomy socioeconomic context that Ajarb evokes is brightened by the flashy acrylic and posca colors he uses. He paints pop, and honors these resilient men and women that he observes daily at the Ndogbassi market, on his way to his painting studio.

Maurice Mboa: his philosophy of art

Maurice, by contrast, uses abstraction while creating anthropomorphic figures with facial features made of grooves. These imagined figures are not actual characters but more so feelings he wants to express. He is particularly brilliant in engraving metal with streaks, circular and leafy shapes and elegantly covering it with acrylic and gold leaves. Here and there he places splashes of color whose luster transforms the steel plate into a precious metal. Each of his works requires that he shapes the metallic material for weeks, equipped with his engraving cutter which he handles like a pen to immortalize his incisive writing. Precision, concentration and pressure management are required for him to carry out his works. His intensely physical creative practice is combined with a complex exploration on identity or the « illusion » of it. His reflection has been shaped by his multicultural journey. Based in Geneva for several years, he is recognized here for his very particular technique and the expression of his individuality through a medium that is tedious to transform. He wants his approach to be delocalized: out of time and space.

By showcasing the work of these two artists jointly, Galerie Des Bains and Invisible Borders are coming together for a second collaboration in a common desire to emphasize the universal aspect of contemporary art and promote contemporary artists from all continents. The Galerie Des Bains is located in the heart of the iconic art district of Geneva, quartier des Bains. Since its creation in 2018, the gallery has already presented numerous shows and makes it a point of honor to exhibit not only internationally recognized artists but also emerging artists to equally showcase their talent. Although recently created, the gallery is an offspring of a three decades old family gallery tradition and has thus rapidly gained experience and traction. No wonder the gallery joins forces with the artistic agency Invisible Borders who is engaged in using art as a tool for development. The agency conceives art as a means for artists to send strong messages around themes linked with identity. Most importantly, it strives to create synergistic ecosystems between different partners around the artists they promote in order to catalyze their success.

The exhibition True to Self is also notable by its charitable nature. Indeed, the Co-vid 19 pandemic raged like a tsunami at both the health and economic level on the whole world. Galerie des Bains and Invisible Borders have chosen to contribute to the collective recovery efforts by raising funds with the exhibition. Part of the profits from the sales will be donated to the association Health Initiatives, active in Uganda in promoting health for the local populations through the John Paul II clinic.

Discover True to Self from June 24th to July 25th

Innovative, philanthropic and nuanced, the exhibition True to Self will be showcased online from June 24th to July 25th. Come discover the amazing works of the artists from June 24th directly at the gallery : Galerie des Bains, 22 rue des Bains, 1205 Geneva.